Save Popponesset Bay owns the land on the Spit west of the land owned by Mass Audubon, which a local resident deeded to them upon his death in 1950.

Prior to 1987, there was no deep-water channel to Nantucket Sound from Popponesset Bay. Boats with a draft of more than 20” could not enter or leave Popponesset Bay close to low tide. In the late “60’s, Lew Schwartz, a New Seabury resident, formed a group he named Greater Popponesset Bay Waterways Association or GPBWA. He and other local individuals repeatedly approached the Town of Mashpee, arguing that the Bay and particularly the New Seabury Community deserved a deep-water channel. All other significant harbors along the South Coast of Cape Cod had dredging programs and viable channels to ensure access to the Sound. While their efforts were unsuccessful, they laid the groundwork for future efforts.

In 1987, a small group of New Seabury residents, many who were involved with FPBWA, decided to try a different approach. Greg Smith and Kevin Harrington, with backing from Ray Tye, Lenny Petze, Don Brabranz, and financial pledges from others, approached the Town of Mashpee with an offer to break a stalemate over the issue. As financing was the significant obstacle for the outer channel dredging, this group offered to help the Town financially by supplementing Town and State money with privately raised donations. The offer worked and plans for the first outer channel dredging began to take shape.

Consequently, Save Popponseest Bay, Inc. was formed as a 501(c)(3) not-for-profit organization, to manage the donations with Greg Smith, its President, and Kevin Harington, Vice President and Treasurer. Al White, one of the people involved with the earlier attempts, became a Board member and Clerk. The outer channel dredging project was completed later in 1987. This initial dredge was also significant as the substantial amount of material nearly doubled the height and width of the Spit. Today, the Town uses fees from taxes on property and excise taxes from docks and boats to keep the outer channel dredged. The dredging has been done almost every year since 1987.

The deep-water access point, at the southern tip of the Island, between that point and the Spit has filled in several times after storms and broken through on several occasions.

Over the years, the Board of SPB has spent many hours interacting at meetings with Town, State and Federal agencies to procure the proper permits to ensure that this channel, at the southern tip of Popponesset Island, be kept safe and navigable. Through this process, SPB has successfully established that the channel has a “right to exist.” SPB today holds the permit to dredge the channel. Water quality and safe navigation have benefited from these efforts to preserve and protect what is now called the SPB Channel.

The Spit and the SPB Channel rely on one another. Until 2002, whenever SPB needed to work on the SPB Channel, SPB had to ask for access agreements from the original owner, Field Point Corporation. This was always a drain of SPB resources as legally there was much to address. Kevin Harrington did most of the negotiating with Field Point and asked Field Point to “donate” this property to SPB. This way, SPB could accept the dredging spoils annually from the winter dredge without requiring third-party (Field Point). After much negotiating Kevin was successful and Field Point (by then a part of New Seabury Corp.) deeded their section of the Spit to SPB.

Over the years SPB has undertaken a variety of important initiatives to achieve its mission to protect and preserve the Spit and to keep the waterways in and around Popponesset Bay safe and navigable. For example, in 2003 Cape Wind, without consulting SPB, announced plans to run transmission cables from the offshore wind farm in Nantucket Sound through the Spit and Popponesset Bay as a means of getting the electricity into the local power grid. This was positioned as a back-up plan to their favored plan. SPB took the lead in opposing this proposed placement of electrical cables, and through its efforts succeeded in removing as a potential location the fragile Spit and shallow Bay for the electricity transmission cables. The two-year court process cost SPB over $100,000 but in the end, the Siting Board agreed with SPB’s legal representation that the fragile Spit and shallow Bay were not appropriate for the electricity transmission cables. Ultimately, the turbines were never built. Cape Wind could not secure the required financing when it was determined that their proposed transmission of electricity was far more expensive than other sources and only competitive because of significant subsidies from the State of Massachusetts. 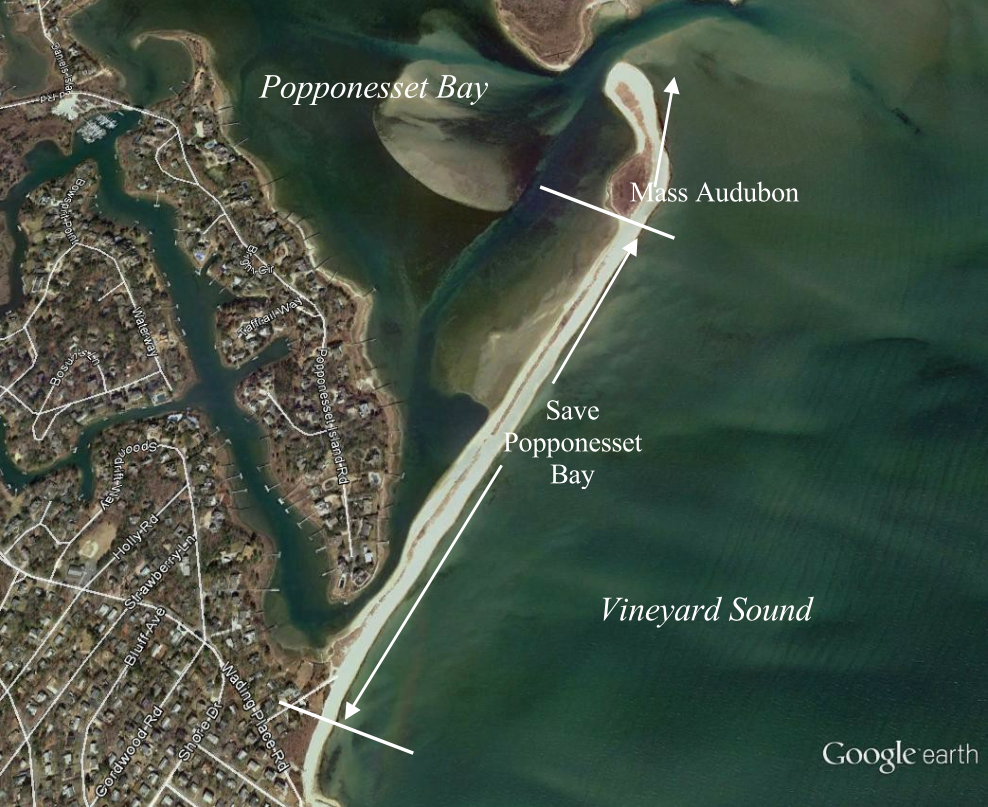 Partnership with the Town of Mashpee

Throughout the years, SPB has cooperated with Mashpee Town Offices including Conservation, Waterways, the Mashpee Selectmen, and Police regarding oversight of the Spit.

In 2004, SPB posted signs to comply with Conservation Commission’s decision to keep kayaks and boats from being stored on the Spit to protect the dune grass. SPB has also posted signs to warn swimmers not to swim in the narrow navigation channel in Popponesset Creek at the foot of Popponesset Island. SPB has coordinated with the Town and Conservation in recent years with increased signage regarding prohibition of dogs from April 1 – September 1 to protect endangered species. Other signs remind visitors that fires and trash are never allowed, and to stay off the dune grasses.

In 2009, the Town of Mashpee approached SPB, requesting financial assistance to support an expanded planned outer-channel dredging project. In exchange for this funding, SPB was able to secure 5000 cubic yards of dredged material which was distributed to areas most in danger of over-wash on the Spit. The sand gives new breeding grounds to the endangered plovers and terns and provides substance for the Spit as a barrier beach, protecting dozens of homes on the east side of Popponesset Island from open waters and harsh storms. In addition, SPB paid for the planting of over 1,500 shoots of dune grass to replace and replenish grassed areas so important to stabilizing the sand on the Spit.

Over the years, the annual dredging of the outer channel was not enough to offset the loss of sand to wind, erosion and storms. In 2014, a study by Woods Hole Group established that the Spit was in crisis and immediate action required.

SPB has developed an effective partnership with Mass Audubon. This partnership has resulted in important recent collaborations, including the installation of “sand drift fencing” in areas of over=wash on the Spit. Their support was critical in receiving approval at the State and local levels for this spit stabilization initiative. The fencing protects the newly planted dune grass which anchors the Spit to provide strength during storms against wash-overs.

Mass Audubon has hired and supervised a “beach monitor” to patrol the Spit during peak summer hours. This monitor, paid for by SPB as part of the agreement to install the sand drift fencing, greets visitors, explains rules and regulations, including the prohibition of dogs, and carries literature about SPB to boaters and walkers. SPB and Mass Audubon worked jointly to produce and install two signs greeting visitors to the Spit. These signs, similar to the one installed in 2004, reinforced various rules and guidelines for behavior on the Spit. 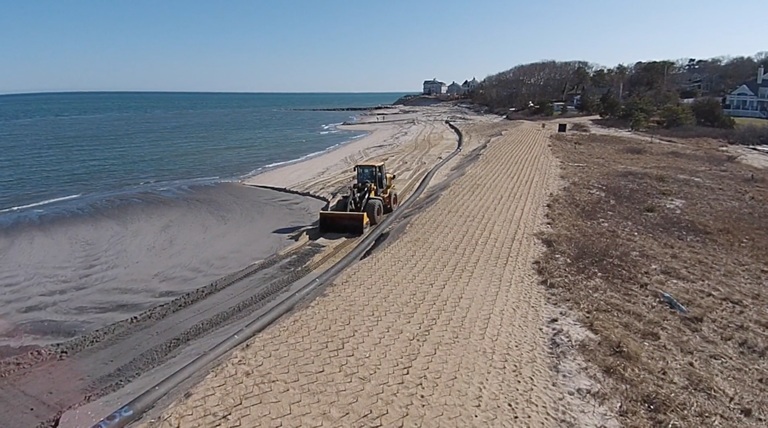 We have increased the size of the Board from three members to nine members in recent years. The Board is represented by resident of Bright Coves, Popponesset and Popponesset Island. Individual members are responsible for marketing, fund raising, communications, maintenance of the Spit, Town relations, finances and the annual summer gathering of our contributors. The Board is all-volunteer.